While the Sony a6500 probably works rather out-of-the-box in Mac and Windows, using it with Linux requires some additional configuration, which is not quite obvious.

In the following, I consider downloading images with DigiKam and computer control of the camera with Darktable to take sequences of photos.

This does not cover how to take video with the camera or how to control it through the network interface. Those tasks you can do with an Android phone, so it's not so critical.

Connecting Sony a6500 (ILCE-6500) to Linux did not seem to work at first, as DigiKam said that mounting with "mount -t "exfat"" failed. I tried updating gphoto2 and such, but it didn't help. DigiKam doesn't seem to be able to connect to the camera as a camera, but only as a mass storage.

Apparently, support for exfat SD cards is not included in standard Kubuntu/Ubuntu, but requires installing the exfat handlers.

Support for a6500 comes in libgphoto2 version 2.5.15. It is not yet available in stable repositories, so you need to add the following repository.

- Switch camera from Auto or other to PC Control.

Now you can get the abilities with gphoto2:

While you can take photos command-line with gphoto2, it's much more convenient with a GUI such as Darktable.

Then just go and click to capture an image. 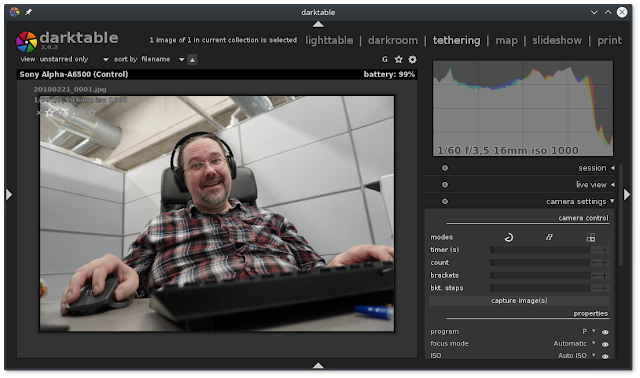 My aim was to create highly visual slideshow videos with typical visual effects such as zooming, panning, and rotation. While there are some tools for automatically creating such slideshows, I wanted better control. Random panning and zooming was out of the question, as images typically have specific focal points and axes that you want to follow meaningfully. Also, I wanted smooth slide transitions and proper image captions. Then, add an intro screen and some music.

While animations and logos would have been nice, creating them was out of scope of this video project. I didn't want to spend too much time with the title screen, so I went with simple text with the Noto font. I colored some labels and added a gradient bar behind the main title. I wanted something moving in the screen, and settled for a panning background image. I dimmed it a bit to bring the text out better. 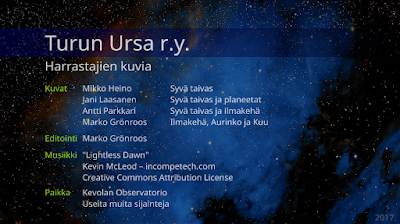 I wanted something moving in the screen, and settled for a panning background image. I dimmed it a bit to bring the text out better.

The images are arranged in two or three video bands, so that each overlaps for two seconds with the previous and next image with a cross-fade effect.

In the following is the sequence for adding an image:

It takes around 15-30 minutes to add a picture, which makes the creation of a big gallery rather a lot of work. Working with batches, you can handle a lot of videos at once, such as when you add effects to them. It's just very important that you decide the times and transitions in advance. I believe the effects given here is are a good basic choice.

Definitely the biggest job was tweaking the zoom effects. Especially, if you look at the solar eclipse sequence, it required very exact matching of the image positions and zoom levels. Tweaking the parameters was rather difficult and they still don't match exactly in the final, but I considered it good enough.

For music, I first tried the Free Music Archive. However, much of the music was for non-commercial use only. That was OK for my purposes, but the effect was also that when I added my video to Youtube, all possible ad income was directed to the musician. That didn't seem quite fair, considering that there was me and others who made the video and its contents. While there was some more free music in Free Music Archive, I noticed that the Youtube Audio Library had a somewhat better selection.

There was very little editing involved with the music. The piece was a bit longer than what I needed, so I truncated it and silenced the end.
Lähettänyt Marko Grönroos klo 2:33 AM 1 comment:

It was again time to reinstall Kubuntu to get more of latest stuff. I had purchased a Kingston 480 GB SSD drive, which was much bigger than the 120 GB one that I had used for some five years. I need to do a lot of video editing, so I needed a lot of disk space, and it must be fast.

I downloaded the Kubuntu 16.04.2 LTS version. I definitely want to use the LTS versions, as I don't want to upgrade every few months.

These are my notes for the process, just to remember what I did there. I'm writing them here just in case someone benefits from it somehow, such as regarding some of the problems.

Run usb-creator-gtk. Select the ISO image and the drive to write to. Start writing the image. The actual burn took me quite long, perhaps around half an hour. I have no idea what it did there, but at some points I thought it was stuck. Nevertheless, got it done.

Booting from the USB stick, I got the following error:
It kept repeating.
Pressing Tab gave a menu of commands. I typed "live" to start the live mode. It worked just fine.

Once the live mode had started, I just clicked the Install Kubuntu 16.04.2 LTS icon. The installation APP popped up.
Kubuntu booted rather fast and also KDE started rather fast. That's an improvement. And it looked good.

Then on to the settings.

Arranging the toolbar proved really difficult. Applets were positioned in wrong places and moving them was really buggy.

Started up the System Settings. First, I chose the "Classic Tree View", which I've used for the last 15 years or so.

There was a lot of settings that I wanted to do:

There's tons of other software that I need to install, but that's a start.

For one thing, KDE was able to link up with my Android phone with KDE Connect. It's at least useful for file transfer and such. It will be interesting to learn what it exactly does.

It took me some years to update (K)ubuntu, but it was worthwhile. The speed seems to have improved greatly. Some of that may be due to the faster SSD, but also rendering seems significantly faster.

I am a bit disappointed with some serious bugs, especially in organizing the desktop panel. That is a very basic task and beginners would get really frustrated. Font problems with LibreOffice seem like something very basic. I am also surprised that there is no special installation mode for SSDs. KDE also has many rather odd defaults.

There is probably much to learn about Kubuntu 16.04. Most importantly, it gives me latest versions of various important software.